The Duchess of Sussex rose to fame in the United States entertainment industry through playing the fictional character Rachel Zane on Suits. Before having a flouring acting and humanitarian career in the States and later marrying the Duke of Sussex in the spring of 2018, Markle studied at Northwestern University, where she is a sister of Kappa Kappa Gamma.

Leading up to Meghan and Harry’s Royal wedding, Kappa Kappa Gamma’s sisters reflected on how Markle carries out the sorority’s core values of “inspiring others and making a positive impact in the world.” Carli Hahn, a sister from a Florida chapter, told Express that she believes “Meghan will be able to use the skills she’s learned and use them with her new role in the royal family.”Liz Kores Graham, who rushed with Markle during their freshman year, described how “Meg was sort of always this ethereal, sophisticated, beautiful creature who lived with us and was always willing to lend you a top” and additionally commented on Markle’s diplomacy when conflicts arose between the sisters.

In 2014, the former Suites star visited Northwestern, where hundreds of students piled into Ryan Auditorium to hear to Markle speak at a panel discussion. She talked about her participation in the university’s Dance Marathon and joked how the local “24-hour Burger King also definitely helped me put on the Freshman Fifteen.” North by Northwestern also documented Markle’s reminiscence of using fake I.D.s to work at a bar in Chicago get into the Keg.

Though highly accomplished, Markle once lived a life much like many students today. 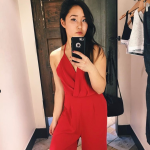